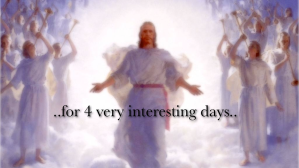 Like many others throughout history and in modern times, possibly including Jesus himself, for 4 days, I thought I was the Messiah.

You either have a mental illness if you thought you were the Messiah or you were stoned.

Well, Jesus thought he was the Messiah, so what does that say about him? ;)

Seriously though, there is nothing mentally ill about thinking you are the Messiah. The way that the concept has been hysterically built up for millennia, it’s no wonder that multitudes of people, Jesus included, have thought they were the Messiah. Assuming Jesus actually did think he was the Messiah and assuming Jesus even existed.

It may be a more extreme type of illusion than religion generally but it is not entirely uncommon. And so long as a person gets over it and returns to normal life, I don’t think one can justify calling it a psychosis.

lol. Thanks :) I had the ulterior motive of making other people who had experienced messiah complexes feel less alienated and embarrassed. I also hope it helps shake anyone currently experiencing a messiah complex out of the mind state. I knew two others before making the video and many more came out in the comments.